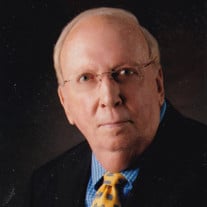 It is with great sadness, the family of Roy Alfred Williams announces his passing on Thursday, January 3, 2019. He was born December 9, 1936, at Newport News, Virginia. Roy was preceded in death by his parents, Cecil Harvey Williams, Sr. and Mayme Willie Howell; his brother, Cecil Harvey Williams, Jr. and his brother-in-law, Roy Leon Smith, Sr. He is survived by his partner and spouse of 49 years, Stephen David Cabaniss; his sister, Betty Lee Smith; his sister-in-law, Mary Dale Williams; his niece, Judith Grierson; and nephews: Andrew Williams; R. Leon Smith, Jr. (Barbara); Steven Smith (Karen); and close personal friend, Jack Allen Shick. Roy grew up in Hampton, Virginia. He received a horticulture degree from Virginia Tech. His training was in landscape design. His early business years were spent in the landscape nursery field. He created and owned Garden Gallery Gifts in Hampton, Newport News, and Williamsburg. In 1980, Roy was invited to the College of William and Mary, by then President Thomas Ashley Graves, to undertake the task of total campus beautification. Within five years, Roy’s efforts resulted in William and Mary College being recognized as one of the most beautiful campuses in America. Roy received many honors, among them, the Staff Service Award from the Society of William and Mary Alumni and the Algernon Sidney Sullivan Award for his contributions to the betterment of William and Mary College. His love of plants and design brought joy and beauty to countless numbers of visitors to both William and Mary and Colonial Williamsburg. In retirement, Roy enjoyed travel to America’s great southwest, Palm Springs, New England, Florida and Nova Scotia. He also shared an antiques business with his partner and spouse, Stephen D. Cabaniss. A service for Roy will be held at Abingdon Episcopal Church, 4645 George Washington Memorial Hwy, Gloucester, VA 23061 at 11:00 AM on Friday, January 18, 2019. This will be followed by graveside interment in the Abingdon Church Cemetery and a gathering after at the Parish House next to the church.

It is with great sadness, the family of Roy Alfred Williams announces his passing on Thursday, January 3, 2019. He was born December 9, 1936, at Newport News, Virginia. Roy was preceded in death by his parents, Cecil Harvey Williams, Sr. and... View Obituary & Service Information

The family of Roy Alfred Williams created this Life Tributes page to make it easy to share your memories.

It is with great sadness, the family of Roy Alfred Williams announces...