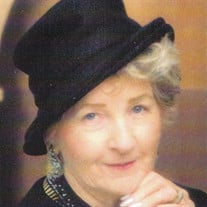 Ruth Marie Crockett, age 96 of Mathews, passed away on October 17, 2019. She was born in Pennsylvania on May 15, 1923. At 16, she moved to Seattle, Washington, where she lived with her mother’s sister and finished High School. During WWII, she worked for Boeing as a Riveter on the new bombers. The girls were called “Rosie the Riveters.” In 1944 she met Alvin Crockett Sr., who had come back from the war in the Pacific. Shortly after his return, they were married. In December 1945 they had their first child Alvin, Jr., A year later, they were transferred to San Diego for a couple of years and then to Key West Florida in 1949. They loved Key West, where their second son David was born in 1952. At the end of 1952, they were transferred to Milton, Florida, then to Jacksonville, Florida. In early 1958 they were transferred back to Key West, where they lived for 32 years. During that time, she worked at Monroe General Hospital then went to work for the Navy Civil Service, where she retired. In 1990 they moved to Mathews, Virginia, where Al’s three brothers and sister and their spouses lived. She soon joined the Women of the Moose and the Red Hat Society. She was married to Al for 68 years and had a wonderful life. She loved her home, gardening, and getting dressed up and going to church. She really loved when her sons and their families came to visit, especially at Thanksgiving. She is survived by two sons, Alvin Crockett, Jr. (Maritza), David Crockett, (Debbie), grandchildren, Kevin Crockett (Millie), David Crockett, Jr., Kelli Crockett, great-grandchildren, Carson, Kendall, and Taylor Ruth. Services will be private. In memory of our loved one memorial contributions may be made to Mathews Volunteer Fire & Rescue, PO Box 72, Mathews, VA 23109. She was a beautiful lady and a loving friend and, most of all, a wonderful mother. She will be missed and remembered by her family and friends. We love you.

Ruth Marie Crockett, age 96 of Mathews, passed away on October 17, 2019. She was born in Pennsylvania on May 15, 1923. At 16, she moved to Seattle, Washington, where she lived with her mother&#8217;s sister and finished High School. During WWII,... View Obituary & Service Information

The family of Ruth Marie Crockett created this Life Tributes page to make it easy to share your memories.

Ruth Marie Crockett, age 96 of Mathews, passed away on October...

Send flowers to the Crockett family.