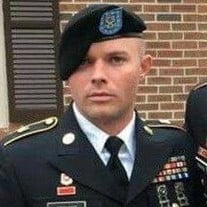 Staff Sergeant Jeffrey Edward Berger, born February 24, 1989, in Santa Clara, CA to Stephen G. Berger and Jane E. Dixon passed away on June 16, 2019, at the age of 30. Jeffrey moved to Gloucester in 2004 graduated from high school and joined the Army in 2007 where he trained as a heavy equipment operator did two tours of duty in Iraq, and Afghanistan was honorably discharged in 2017 and returned to Gloucester. He continued his passion for the military as an active member of the Virginia National Guard in West Point, VA and worked at various jobs including on a tug boat in the Chesapeake Bay. His hobbies included restoring vehicles such as trucks, motorcycles, and Mustangs. His incredible sense of humor kept everyone laughing, and he was a friend and mentor to everyone he met, including fellow soldiers and many friends. Jeffrey was preceded in death by maternal grandparents Thomas F. and Margaret A. Dixon, paternal grandparents Frank and Ruth Berger, aunt Nancy Dixon Hall. He is survived by his parents Stephen G. Berger and Jane E. Dixon, uncle’s Neil Dixon, Thomas A. Dixon, and wife Phillis as well as several cousins. A celebration of life service will be held 2:00 p.m., Saturday, July 20, 2019, in the chapel of Hogg Funeral Home, 3098 George Washington Memorial Hwy, Hayes, VA 23072. Inurnment will be private. In Jeff’s memory, memorial contributions may be made to Veterans of Foreign Wars, VFW Processing Center, PO Box 8958, Topeka, Kansas 66608-8958.

The family of Staff Sergeant Jeffrey Berger created this Life Tributes page to make it easy to share your memories.

Send flowers to the Berger family.