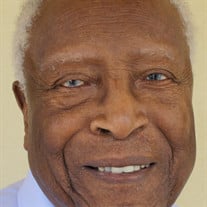 Stanley B. McMullen, Sr., of Gloucester, affectionally known as "Mr. Mac" to hundreds, 95, was called home on June 27. A Gloucester resident for the past 60 years, Stanley was born in August 1923 in Hartwell, Georgia. He was the youngest of 11 children of Adeline Oglesby and Jim McMullen. He joins his parents and eight brothers and three sisters in eternal rest. Stanley's family moved to Statesville, North Carolina in 1924. There, he attended two schools - Morningside School and Unity School. During that period, the grades within the schools fluctuated to accommodate these rural schools for blacks. He graduated from Unity High School in 1943. In 1945, Stanley was called into the military near the end of World War II. He served in the Navy for a little over a year. His shipmates often joked he had helped to end the war because, on his 22nd birthday, his ship was headed to Pearl Harbor, but within the week, Japan surrendered, bringing the war to an end. When he returned to Statesville, a friend encouraged him to apply to Tuskegee Institute in Alabama. He attended Tuskegee Institute for four years, earning his Bachelor of Science in vocational agriculture. After graduation in 1950, he was hired as a teacher for a farm training program in Halifax, Virginia where he taught veterans returning from the war how to establish a farm and good farming practices. During his six years in Halifax, he also taught in the Halifax County public school system. Stanley married his childhood friend, Glenna Stevenson also from Statesville, in 1955. They moved to Gloucester, Virginia on their first anniversary in 1956. Stanley served 29 years as an agricultural educator with the Gloucester County Public Schools. His first position in Gloucester was teaching at T.C. Walker High School where he taught for 13 years until the school system integrated. The remainder of his career was at Gloucester High School where he taught vocational agriculture and agricultural mechanics. In 1971, Stanley earned his Master’s Degree in Agricultural Education from Virginia State University where he attended night school. He was also the sponsor of the Future Farmers of America Chapter for decades, one of his favorite associations. Stanley says “students were required to carry a home project--an acre of corn, soybeans or peanuts. The last two periods in the afternoon I visited the home projects. He notes, “to have a student come to me and tell me I have helped him, that paid for it all.” Stanley retired in 1985 after teaching agriculture for more than 35 years. Retirement kept him busier than ever. He has been a faithful member of the Church of Christ for 75 years and has served as Superintendent of Education programs, Elder, Bible School Teacher and as a member of various committees. In his 33 years of retirement, Stanley has also served on a variety of boards, commissions, committees, and councils. His continued efforts to support the community have been recognized: 1984 - honored by the national Future Farmers of America (FFA) with the Degree of Honorary American Farmer. The degree was the highest honorary degree that can be awarded by the national association, recognizing Stanley for his outstanding dedication to the FFA and vocational agriculture. 1997 - Retired Educator of the Year by the Gloucester Retired Educators. He was recognized for his many accomplishments on various county committees. 2001 - Tuskegee University Honoree as recognized by the Tidewater Tuskegee Alumni Association. During his more than 30 years on the Association, his primary concern was raising scholarship funds to help high school students attend institutions of higher learning. He has served as vice president, chaplain, and financial secretary. He served as chairman of the Unity Alumni Scholarship Committee for 12 years. 2002 - Volunteer of the Year as recognized by the Gloucester Chamber of Commerce for serving on a variety of committees to improve the lives of Gloucester County citizens and visitors. 2011 - Gloucester County Fair Honoree recognized by Gloucester County for his many years and accomplishments within the community. 2018 - Honored by the Unity High School Reunion Committee on his 75th High School Reunion, held in Statesville, North Carolina. 2018 - Honored by the Tuskegee Alumni Association for the Outstanding Service to decades of financial support to the youth of Tuskegee University. For many years, Stanley loved traveling the United States to attend annual reunions held by his U.S.S. Willis navy shipmates. Stanley is survived by his wife of 63 years Glenna Stevenson McMullen and their three children - Stan Jr. (Ann), Veda, Martha Adelyn (Lynne) (John McNeill), two grandchildren, Savannah and Jonah and a loving host of nieces and nephews. A funeral service will be held 11:00 am Tuesday, July 2, 2019, in the chapel of Hogg Funeral Home. Interment will follow in Windsor Gardens Cemetery and Mausoleum with United States Navy Military Honors. The family will receive friends at the funeral home Monday, July 1, 2019, from 6:00 until 7:30 pm. In memory of Mac, memorial contributions may be made to Gloucester Volunteer Fire & Rescue PO Box 1417, Gloucester, VA 23061 or Riverside Walter Reed Hospice, 7358 Main Street, Gloucester, VA 23061 or Gloucester Retired Teachers Association, c/o PO Box 828, Gloucester, VA 23061.

Stanley B. McMullen, Sr., of Gloucester, affectionally known as "Mr. Mac" to hundreds, 95, was called home on June 27. A Gloucester resident for the past 60 years, Stanley was born in August 1923 in Hartwell, Georgia. He was the youngest of... View Obituary & Service Information

The family of Stanley Brown McMullen Sr. created this Life Tributes page to make it easy to share your memories.

Send flowers to the McMullen family.