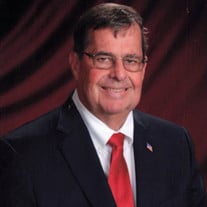 Stephen Wright Neill, age 77, died peacefully at his home on November 26, 2021 surrounded by all that he loved. A native of Escondido, California, he was the eldest of three children born to William and Gwendolyn Neill, who preceded him in death. He is also predeceased by his father and mother-in-law, William and Sue Hogge and a niece, Kristy Stupar Tyler. Steve spent much of his youth on a citrus ranch owned by his parents and grandparents tending various citrus and avocado trees. He loved sports, particularly basketball and swimming, achieving numerous school records while on the swim team. He was a Boy Scout summer camp counselor and spent time drag racing in the rail dragster that he built himself. During this time he developed a work ethic and love of the outdoors that followed him throughout his life. Steve graduated from Escondido High and after attending college, he enlisted in the United States Navy, excelling in a career as a Navy diver, a master explosive ordnance disposal (EOD) officer and a mine countermeasures expert. He served onboard the USS Bon Homme Richard (CVA-31), the USS Saratoga (CV-60), USS Detroit (AOE-4) and the USS Forrestal (CV-59). He also led an Explosive Ordnance Disposal Detachment in the Persian Gulf where his team broke a record for live mine counter-detonation that had stood since World War II. His naval career included special details as well as Secret Service Support that brought him to duty stations and deployments in California, Florida, Maryland, Hawaii, the Philippines, Guam, Vietnam, the Bahamas, Sigonella and finally to Virginia, where he met Carolyn, the love of his life. They were married on December 5, 1981. Steve proudly served his country for 29 years, retiring in 1994 as a CWO4. Steve received numerous service awards. Among them, the Bronze Star with Combat “V”, Navy Commendation Medal with Gold Star, Navy Achievement Medal, Navy Unit Commendation (5th), Meritorious Unit Commendation with 3 Bronze Stars and the Legion of Merit with 2 Bronze Stars to name a few. His naval skills transitioned into employment as the first and only civilian to manage the Explosive Ordnance Disposal (EOD) Range at the Naval Weapons Station, Yorktown and as an EOD project manager and remediation contractor for several government contractors. He traveled to job sites on the east coast, as well as to Alabama and Alaska over the next ten years, retiring for a second time in 2005. He cherished the time he spent with Carolyn and their fur babies, Coco, Duke, Gracie and Mattie, at their home on Oyster Cove. He loved cooking for family gatherings and nothing made him happier than spoiling their nieces and nephews. He took pride in the upkeep of his yard and vegetable garden where he shared the fruits of his labor with family and friends and spent hours with Carolyn canning tomatoes and freezing corn. He could be found at Union Baptist Church helping with numerous church functions and at the Abingdon Ruritan Club helping to complete construction of their new building, preparing and carving steamship rounds for various functions, heading a team of members in baking dozens of cookies for the annual Children’s Christmas Party, mowing the Ruritan grounds for various events, and helping with community projects wherever he was needed. Steve was a lifetime member of the Navy EOD Association and was responsible along with three other shipmates for resurrecting this organization. He was Ruritan of the Year in 1991 and received recognition from Ruritan National for the hours he spent in completing construction of the Abingdon Ruritan building. Our family extends a very special “thank you” to Dr. Ronald Haggerty and staff and to our Riverside Walter Reed Hospital Family including the registration staff, as well as Danielle Pittman, Christine Johnson, Amy Smith, Maryann Faulkner, Chris Masiak, Michelle Johnson, Adam Craven and Susan Young who have supported us for the past 4 years. We are also grateful to the Riverside Walter Reed Hospital Home Health and Hospice staff who provided daily comfort and reassurance throughout the past month. Steve is survived by his wife of almost 40 years, Carolyn Sue Hogge Neill; sister, Sue Neill Stupar (George); brother, John Neill (Susie); brothers-in-law, William Hogge (Ann) and James Hogge (Debbie); nieces, Shannon (Travis), Crystal (Ashton) and Meredith; nephews, Britton and Morgan; great niece, Scarlett; great nephews, Hayden, Carter, Jett and Owen. A Celebration of Life Service, conducted by Pastor Jared Berry and Pastor Richard Whiteheart, will be held at Union Baptist Church on Thursday, December 2, 2021 at 11:00 am. The family will receive friends starting at 10:00 am. Interment in Rosewell Memorial Garden Cemetery. A reception will follow at the Abingdon Ruritan Club. Flowers are always welcome as are memorials in Steve’s memory to Union Baptist Church Building Fund, 9254 Guinea Road, Hayes, VA 23072 or the EOD Warrior Foundation, 716 Crestview Avenue, Niceville, FL 32578 . Services under the direction of Hogg Funeral Home & Crematory. For those not able to attend the Thursday funeral service, the church will be streaming it live and has provided the following weblink: www.unionbaptistchurch.net/live-worship

Stephen Wright Neill, age 77, died peacefully at his home on November 26, 2021 surrounded by all that he loved. A native of Escondido, California, he was the eldest of three children born to William and Gwendolyn Neill, who preceded him in... View Obituary & Service Information

The family of Stephen Wright Neill created this Life Tributes page to make it easy to share your memories.

Stephen Wright Neill, age 77, died peacefully at his home on...

Send flowers to the Neill family.