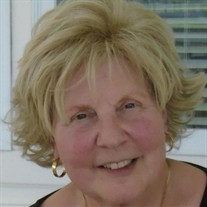 Theresa A. Syslo (Teri) of Mathews County, Virginia, departed this vale of tears after bouts with horrific, debilitating maladies on the morning of November 10, 2019. Mrs. Syslo was born on February 17, 1942, to John and Bertha Matus of Bethlehem, Pennsylvania, where she attended the Holy Ghost Parochial School and Bethlehem Catholic High School, graduating in the Class of 1960. Teri, a graduate nurse from Temple University in Philadelphia, Pennsylvania, then pursued her career, principally serving as an operating room nurse assistant to open-heart surgeons. During her surgical nursing career, she worked with nationally famous doctors, Dr. John Kirklin, a pioneer heart surgeon at the University of Alabama Hospital at Birmingham, and Dr. Harold Tsugi, an innovative thoracic surgeon at the Los Robles Regional Hospital in Thousand Oaks CA, performing, at the time, leading-edge technological cardiac surgical procedures. Later, she became the operating room supervisor and instructor at the Arlington Hospital, now the Hospital of Northern Virginia, and the Operating Room Supervisor for the University of Connecticut John Dempsey Hospital in Hartford, Connecticut, where she took to Nordic skiing with a passion. Stylish and sophisticated, Teri joined Trans World Airlines (TWA) as a hostess, flying domestically between the continent mid-West and San Francisco, California, where she met and married her husband Joe, an Air Force pilot. For fifty years, they traveled together extensively, crossing all of the imaginary lines marking the parameters of the earth, visiting both exotic and ordinary lands. Her favorite place was Madrid, Spain, where they lived for three years, and where she became becoming a frequent spectator at Las Ventas, an ardent fan of the Zarzuela, and a connoisseur of Spanish cuisine; she cried on departure. In more recent years, Teri proved herself as a successful businesswoman, achieving Medallion Status in Agency for residential real estate in Potomac, Maryland. They settled finally in Virginia's "River Country," where Teri excelled in sailing, fishing, gardening, and just plain enjoying life. We will miss her bright smile and her chapeaus for every occasion. Teri is survived by her husband Joe, her brother John Matus (Rosemary), numerous cousins, nieces, and nephews. The family will receive friends on Friday, November 15, 2019, from 7:00 until 8:30 p.m. at Hogg Funeral Home, Gloucester Point. A Catholic Mass of Christian Burial will be held at 11:00 a.m. Saturday, November 16, 2019, in the Church of St. Therese, 6262 Main Street, Gloucester, VA 23061. Interment in Arlington National Cemetery will be held at a later date. In her remembrance, contributions can be made to: Bethlehem Catholic High School, Attn: Advancement, 2133 Madison Ave, Bethlehem, PA 18017 and on the memo line notate for the Theresa (Matus) Syslo '60 Memorial Nursing Scholarship.

Theresa A. Syslo (Teri) of Mathews County, Virginia, departed this vale of tears after bouts with horrific, debilitating maladies on the morning of November 10, 2019. Mrs. Syslo was born on February 17, 1942, to John and Bertha Matus of Bethlehem,... View Obituary & Service Information

The family of Theresa "Teri" A. Syslo created this Life Tributes page to make it easy to share your memories.

Send flowers to the Syslo family.