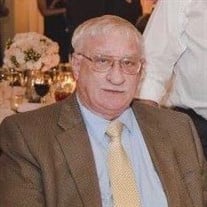 Walden D. Carmine Jr., 70 years of age, passed on Tuesday, July 21, 2020 at Riverside Regional Medical Center. Known to his friends as Donny, he was born March 28, 1950 to the late Walden and Katherine Carmine of Gloucester and was the oldest of seven children. He was a member of Gloucester Point Baptist Church, graduated Gloucester High School in 1968 and attended Virginia Polytechnical Institute (Virginia Tech). Donny started his career working for Vepco in Richmond, Yorktown Power Station, and Surry Nuclear Power Station. He traveled all over the world, working in the field of Electrical Control Systems. He retired as Senior Electrical Controls Engineer for Varec Incorporated of Atlanta, Georgia. He enjoyed traveling, researching genealogy, history, working on computers and helping his family. He was a beloved Uncle and always enjoyed participating in the lives of his nieces and nephews. He had a fond love for animals and helping people in need. He helped his friends in addition to his family. He was known for his deep conversation and the ability to research many topics. He was always handy giving advice and fixing things. He will be deeply missed by his friends, family, and all that knew him. He was preceded in death by his parents Walden D. Carmine Sr. and Katherine A. Carmine, and brother, Robert W. Carmine He is survived by his brothers and sisters; Jerry Carmine (Janice), Penny Reynolds, Betsy Berger (Robb), John Carmine, and Steven Carmine. His nieces and nephews, Ashley McGhee (Nathan), Jillian Carmine, Lauren Finstad (Jordan), Kristen Berger, Matthew Carmine, and Samuel Carmine. His great niece and nephew, Grace Finstad and William McGhee. Interment will be in Rosewell Memorial Garden Cemetery, due to the COVID-19 pandemic, services will be private for the safety of family and friends’. Arrangements under the direction of Hogg Funeral Home. In Donny’s memory contributions may be given to Gloucester Point Baptist Church, P.O. Box 305, Gloucester Point, VA 23062.

Walden D. Carmine Jr., 70 years of age, passed on Tuesday, July 21, 2020 at Riverside Regional Medical Center. Known to his friends as Donny, he was born March 28, 1950 to the late Walden and Katherine Carmine of Gloucester and was the oldest... View Obituary & Service Information

The family of Walden D. "Donny" Carmine Jr. created this Life Tributes page to make it easy to share your memories.

Send flowers to the Carmine family.