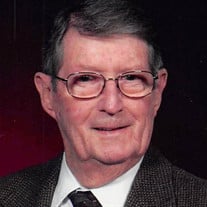 Gloucester: William H. (Bill) Craig departed this life on March 17, 2018 to be reunited with Temple Walters Craig, his wife of 61 years; his parents Kathleen and Henry Craig; and his sister Kathleen Craig Fox, who are residing in the house of their Lord and Savior Jesus Christ. Born in Chicago, IL in 1925, Bill grew up in Coral Gables, FL. Service was a defining characteristic of his life. Upon summer graduation from Miami High School in August 1943, he enlisted in the US Navy at age 17, serving during World War II as a combat air crewman and door gunner on PB4Y-2 patrol bombers flying out of Okinawa. After leaving the Navy, he returned to Miami, where he and Temple married in 1949. He studied law at the University of Miami, earning a Juris Doctor degree in 1951. In 1985, after a 33-year career as a U.S. Federal Investigator, he and Temple retired to Gloucester, where he served as Magistrate for 13 years. In addition, as avid gardeners, Bill and Temple were part of the small group that established the Flat Iron Gardens on Ware Neck. Bill also enjoyed drawing, painting and, especially, woodcarving, winning numerous awards for his songbird and relief carvings. He is survived by: son William H. Craig, Jr. and wife Marise of Madison, Virginia; daughter Temple Marie Craig of Fredericksburg, Virginia; granddaughter Brittany Craig Rose, husband Andrew and great-grandchildren Gabriel, Abigail, and Madeleine Rose; grandson Ross Craig, wife Christine and great grandchildren Liam and Harper Craig. Other survivors include nephew David Mead-Fox and wife Merrill; Cynthia Fox Paradis and husband Irvin; as well as very special friend and companion Nan Murray. A memorial service will be held at the Grace Covenant Presbyterian Church, Gloucester at 11 a.m. on Tuesday, March 27, 2018. Interment will follow at Quantico National Cemetery at a later date. In lieu of flowers, the family requests that donations be made to the Gloucester Volunteer Fire and Rescue Squad, P. O. Box 1417, Gloucester, VA 23061, or the Alzheimer’s Association of Greater Richmond, 4600 Cox Road, Suite 130, Glen Allen, VA 23060. Arrangements under the direction of Hogg Funeral Home and Crematory, Gloucester Point. Please visit www.hoggfh.com to share condolences and memories.

Gloucester: William H. (Bill) Craig departed this life on March 17, 2018 to be reunited with Temple Walters Craig, his wife of 61 years; his parents Kathleen and Henry Craig; and his sister Kathleen Craig Fox, who are residing in the house of... View Obituary & Service Information

The family of William H. G. Craig created this Life Tributes page to make it easy to share your memories.

Send flowers to the Craig family.