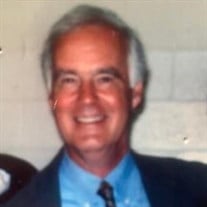 William Bruce Ellen, “Bill”, age 75, passed away on July 8, 2021at his beloved home, MolePoint, in Mathews, VA. His last days were spent at his home accompanied by family and friends, including his watchful four-legged companions, who never left his side. Bill was born in Greenville, South Carolina to Col. Ciscero Jasper Ellen Jr. and Josephine Hunter Ellen. Many and various were the places he lived. Born in the Upcountry as the first and only son of an Air Force pilot, he’d travel just north, to the furthest west, into the central flat, before back east. With so many miles already notched in his young life, the Marine Corps sent him far east. He’d find shade under mangrove; he’d find relief from the jungle heat; he patrolled below the line of duration. He returned to his family’s immense relief where they settled in VA. Upon attaining his engineering degree from ODU, he established a business he carried on for nearly fifty years. Fortune favored him and brought him a “poorly behaved, but very sweet dog” a dog who found her way to the local animal shelter, whereupon, Bill met his wife of over thirty years. After so many stops, so many brief stays in places far-flung and often hostile, he found the house to call home after stepping across the threshold only. With his wife, he found his forever home at MolePoint, and there, they raised their two sons. But his travels did not cease: for his work he traversed the whole of the state; he’d navigate briar and bramble, march over Piedmont hills, and rest in the cool places. He loved his work, its challenges, and the friendship and camaraderie of his colleagues. Bill had a passion for supporting his family’s endeavors; rescuing and rehabbing fledgling osprey, providing a home for exchange students and coaches, hosting and refereeing paintball cookouts, camping trips, caring for old ponies, hosting family reunions, attending a multitude of sporting events, and giving summertime boat rides. He loved creating landscape/home projects and bringing them to fruition. Finally, when possible, he’d settle in for a well-deserved nap with 3 cats and a small dog in his recliner Bill was kind. He was patient, he was stoic and generous. Never yielding, always pursuing with sincerity of heart and a fair humor. No death in war could more than match it. The silent courage to fight on, dignified resolve to accept imposed conditions, all mustered by the strength driven by an unwaning devotion to his family. They could ask no more or another thing of him, for he was a good father, beginning to end. He enriched our lives, our home, and our family and he will be missed by his wife, Bonnie; his sons, William Bruce Ellen Jr. and Thomas Ryan Ellen; his sister, Priscilla Ahrens (Steve); his mother-in-law, Virginia Baldacci; his brother-in-law, Don Baldacci (Dana) Nieces; Katie Baldacci, Claire Baldacci; and a plethora of dear friends and colleagues. There will be a gathering of family and friends at MolePoint on July 31, 2021, at 11:00 A.M. in Susan, VA. Donations for old ponies, stray cats, and wayward dogs may be sent to Gloucester-Mathews Humane Society, P.O. Box 385 Gloucester, VA. 23163. Services under the direction of Hogg Funeral Home and Crematory.

William Bruce Ellen, &#8220;Bill&#8221;, age 75, passed away on July 8, 2021at his beloved home, MolePoint, in Mathews, VA. His last days were spent at his home accompanied by family and friends, including his watchful four-legged companions,... View Obituary & Service Information

The family of William Bruce Ellen created this Life Tributes page to make it easy to share your memories.

Send flowers to the Ellen family.