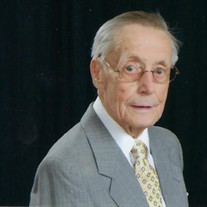 William Galloway (Bill/Wullie) age 97, of Hayes, went home to be with his Savior on July 31, 2020, surrounded by his family. Bill was born in New Galloway, Scotland, and immigrated to the United States (Gloucester) in 1963 with his wife and four children to pursue the American Dream. Bill’s family name Galloway denotes the South Western district of Scotland, where the family has lived for centuries. Bill retired from Mercedes Benz Hampton Truck Assembly Plant; he was a farmer, self-taught carpenter, electrician, and auto mechanic (Volkswagens were his specialty). For many years he taught Scottish Country Dancing in his home, in addition to a founding member and treasurer for Gloucester Scottish Country Dance Club. He never forgot his Scottish heritage and was proud to be an American Citizen. A gentle, kind man always willing to help others and the oldest member of Beech Grove Baptist Church. He was preceded in death by his wife of 62 years, Betty Harkness Galloway, parents, Benjamin and Annie Mcllwraith Galloway, sister, Janet Kilpatrick Taylor, brother, John Galloway, and son-in-law, Ronald Oliver. He is survived by his four children, Ann Oliver (Paul), Ben Galloway (Marie), David Galloway and Sylvia Oliver, four grandsons, Richard and Brian Oliver, Christopher and Brandon Galloway, five great-grandchildren, Kaylee Dutton (David), Kelsee, Kollin, Mathew, and Jonathan Oliver, a sister, Annie Murdoch of New Galloway, Scotland as well as numerous nieces and nephews. A graveside service will be held on Wednesday, August 5, 2020, at 10:00 a.m. in Rosewell Memorial Garden Cemetery. Friends are requested to assemble at the cemetery; social distancing is mandatory. In memory of our loved one, memorial contributions may be made to Beech Grove Baptist Church, Building Fund, PO Box 468, White Marsh, VA 23183. Services under the direction of Hogg Funeral Home.

William Galloway (Bill/Wullie) age 97, of Hayes, went home to be with his Savior on July 31, 2020, surrounded by his family. Bill was born in New Galloway, Scotland, and immigrated to the United States (Gloucester) in 1963 with his wife and... View Obituary & Service Information

The family of William Galloway created this Life Tributes page to make it easy to share your memories.

Send flowers to the Galloway family.