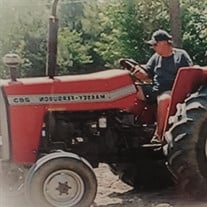 Hayes: William L. “Bill” Trueblood, 76, passed away at his home December 27, 2016, surrounded by his loving family. Bill served his country honorably in the U S Air Force, Aircraft Jet Mechanic Supervisor stationed at Langley Air Force Base. He retired from Langley as an Aircraft Mechanic. He was straight forward and never idle, always working and could often be found driving his dump truck or riding his tractor, hauling sand or gravel, or plowing someone’s garden. Bill was always ready to help in any way he could. His family was very important to him, he played such a pivotal role in their lives, it was his greatest achievement to be a husband, father, and grandfather. He will be missed so much. He was preceded in death by his parents, Elmon and Esther Trueblood; and his sisters, Gloria Aignor and Martha Moxley. Bill is survived by his loving and devoted wife, Luci Trueblood; children, Billy Trueblood (Anne), Lisa Kellum (Eric), Monica Corey, and Melissa Brown (Russell); grandchildren, Matthew Hall, Justin Corey, Ashleigh Bent, Brandon Corey, Meghan Butler, Jordan Trueblood and William Trueblood; sister, Bonnie Copenhaver (Ken); and brother, Benny Trueblood (Lynn); and three great grandchildren, Kendall, Aubree and Addison. Graveside funeral service officiated by Reverend Dr. Margaret Louden will be 2:00 p.m. Saturday, December 31, 2016, in Rosewell Memorial Garden Cemetery. Friends are asked to assemble at the cemetery. The family will receive friends Friday, December 30, 2016, from 7 until 8:30 p.m. at Hogg Funeral Home, Gloucester Point. In memory of Bill please consider donations to the Abingdon Volunteer Fire and Rescue, P. O. Box 9, Bena, VA 23018.

The family of William L Trueblood created this Life Tributes page to make it easy to share your memories.

Send flowers to the Trueblood family.